The CMA's collection is organized thematically, so you can see how different artists, across different eras and different continents, have focused on common ideas. Seeing pieces together that examine the same themes - heroism, or vice and virtue, say - gives them a whole new context.

Check out a sampling of our thematic galleries below, or view highlights of the CMA collection.

Become a member. Be a regular.

Don't feel compelled to see everything in one visit! Our members can enjoy a slower pace, knowing they can come back anytime to browse the galleries for FREE.

Artists often explore characteristics that communicate a person's status, personality, and distinctiveness. Gender, ethnicity, sexuality, nationality, and heritage can be constructed or reconstructed through the use of color, form, and technique. These attributes determine and contribute to our self-identification within a complex network of social, political, religious, national, and local groups. In addition to representing the people who populate their visual world, artists have the power to express the maker's sense of self.

Art gives us the opportunity to think about individuals who may or may not be familiar to us. Do these pieces articulate a sense of who we are as individuals, as society, or as a nation? 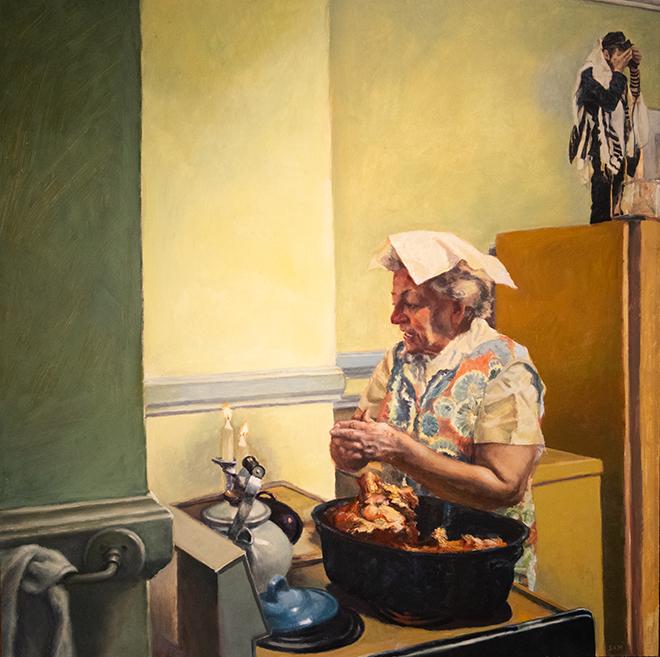 This painting depicts a religious ritual: the artist’s mother is seen at her stove in prayer over a Sabbath meal she is preparing. Behind her, a small figure of the artist’s Orthodox Jewish father stands in prayer on the refrigerator. What cannot be seen are the artist’s deeper motives. For Abeles, this painting was a way to express his desire to see his parents together. 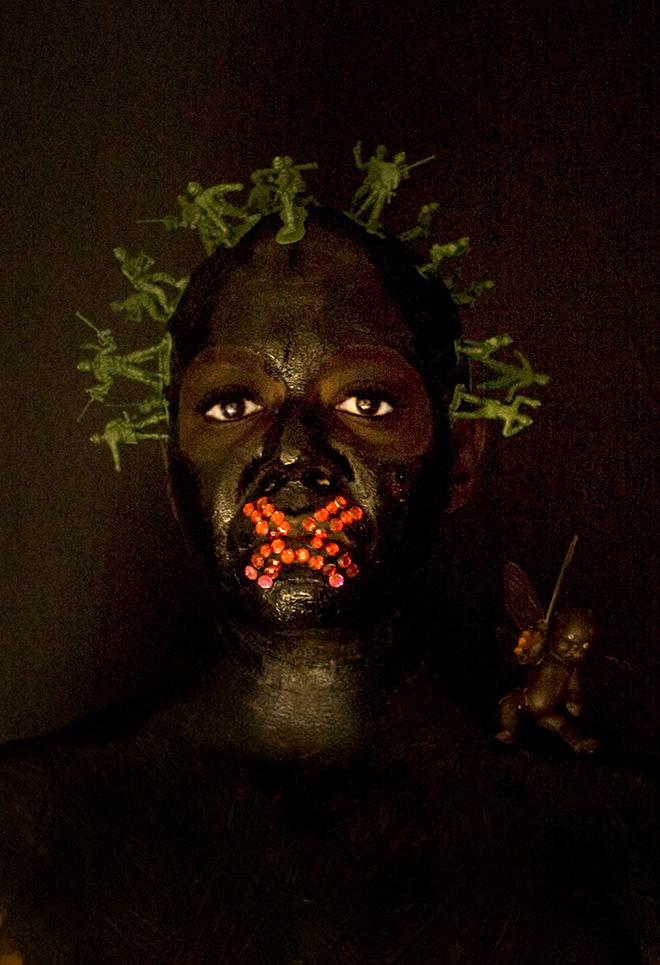 Michaela Pilar Brown’s body is a battleground. In Speak No, she uses toy soldiers, rhinestones, and a Kewpie doll to make a powerful statement about the colonialization of white beauty standards on the black female form. Her crossed mouth emphasizes the oft-muted black woman’s voice, and the red color alludes to a kind of gaping wound. The artist is demonstrating the internal battle women of color often experience regarding their beauty and self-worth; she is also declaring victory over her body, reclaiming control of her own form, blackness, and identity. 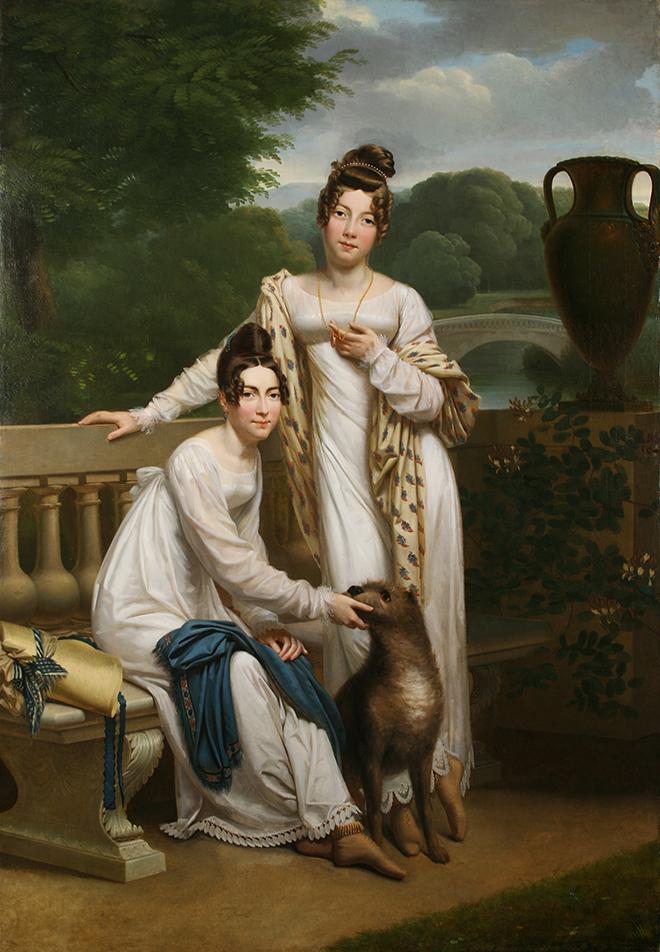 In the wake of the French Revolution, the opulent court fashions of Marie Antoinette fell out of favor. These aristocratic women are clad in the Empire style, the high-waisted Neoclassical silhouette so in vogue in the Napoleonic era. With the recently developed cultural emphasis on individual liberty and free will, women’s fashion was increasingly becoming not just a way to convey status but a means of self-expression. 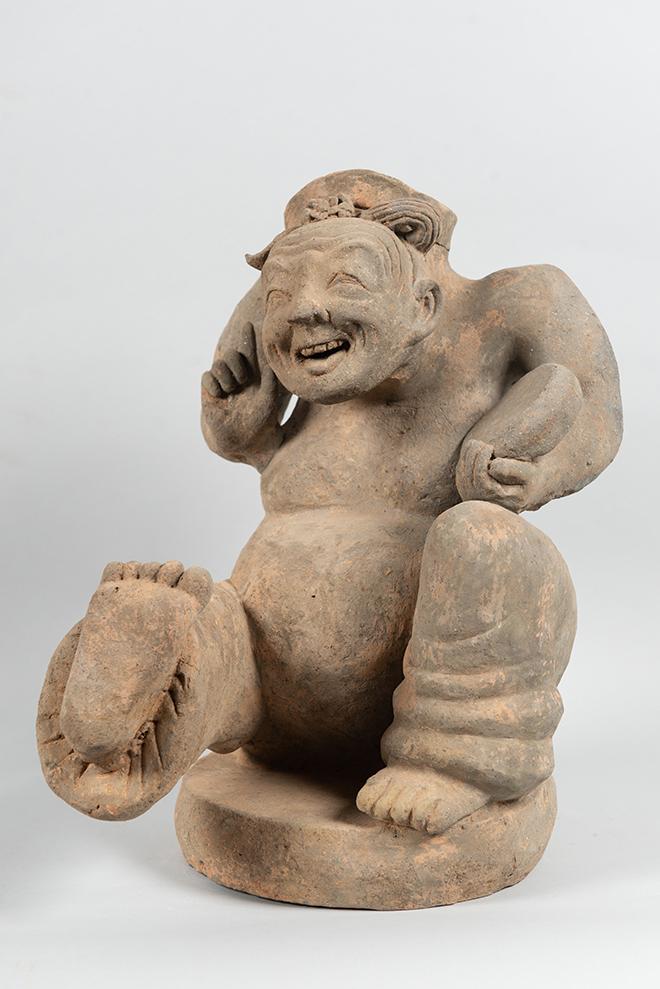 This evocative sculpture reveals a figure that is animated even while being carved in stone. The artist has captured a lively storyteller, in the midst of practicing his craft. For Chinese tomb figures like this one the intent was not to perfectly depict an individual’s form but rather to convey their purpose.

Many early 20th-century artists believed that challenging the rigid rules of academic painting was the greatest achievement of Impressionism. The work of Monet and his colleagues suggest that light and color change the permanence of an object right before our eyes. Things in the world, their paintings imply, are not as solid or real as they seem. This attitude was rebellious and modern in its time, and it would have great consequence for the course that art in the Western world would take.

During this same time period, many artists demonstrated an interest in emotion and a preference for subjective interpretation over realistic representation. New types of art including Fauvism, Cubism, Futurism, Surrealism, and Abstract Expressionism emerged as new materials, new techniques (notably the expressive use of color), and especially new attitudes evolved.

Early modern artists separated themselves from earlier traditionalists, and their work pointed toward and prepared the way for the wildly experimental and often conceptually complicated work of our own time. 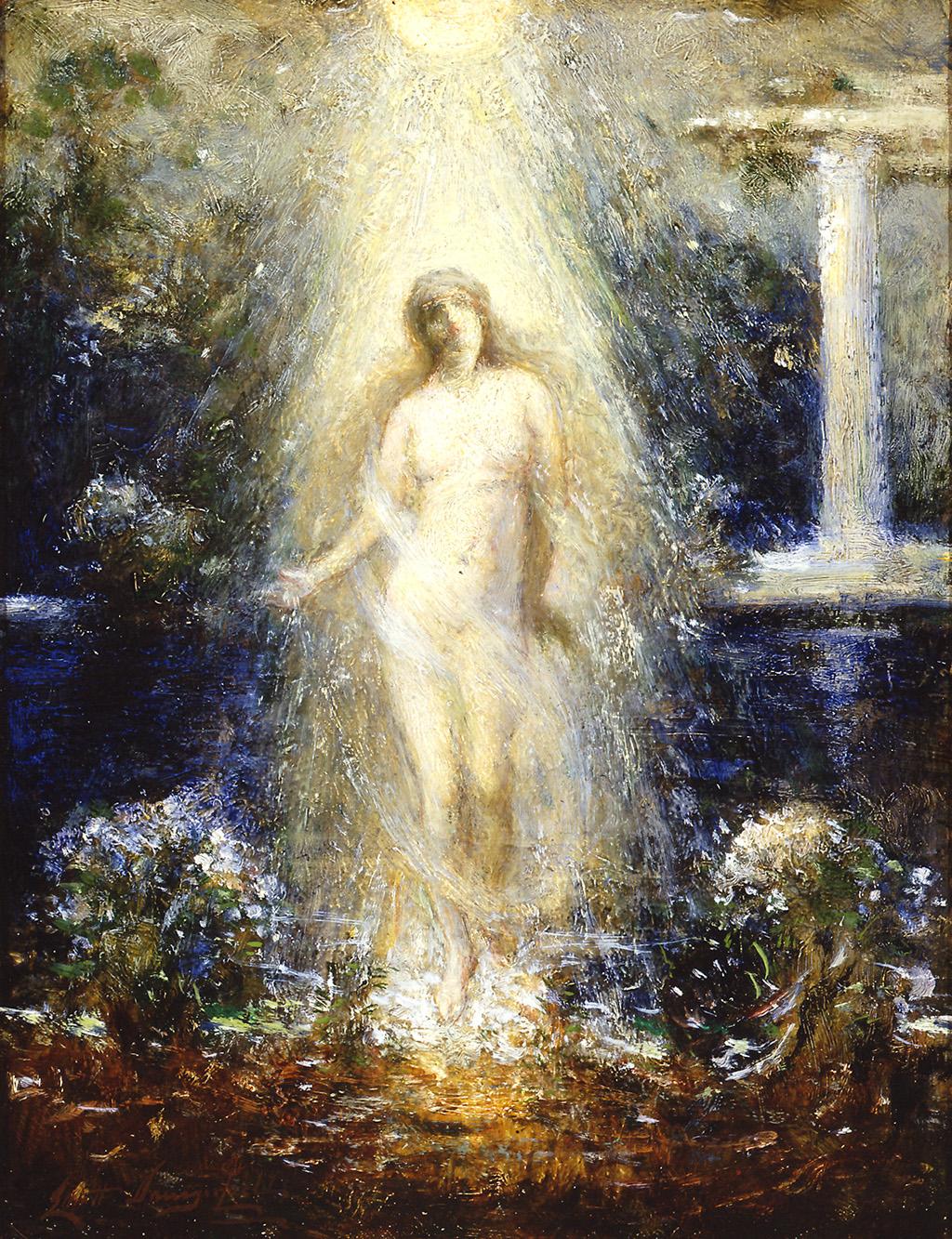 The moon’s path transports or embodies an otherworldly goddess while a classical marble column at water’s edge echoes her luminous figure. Ethereal in subject and shimmering in gesture, this painting fits the ideals of the late 19th-century Symbolist movement that first originated in France and that Daingerfield encountered in Europe. Associated with personal emotions rather than faithful depictions of the material world, Symbolism’s subjects often came from myth, biblical text, and monstrous legends. 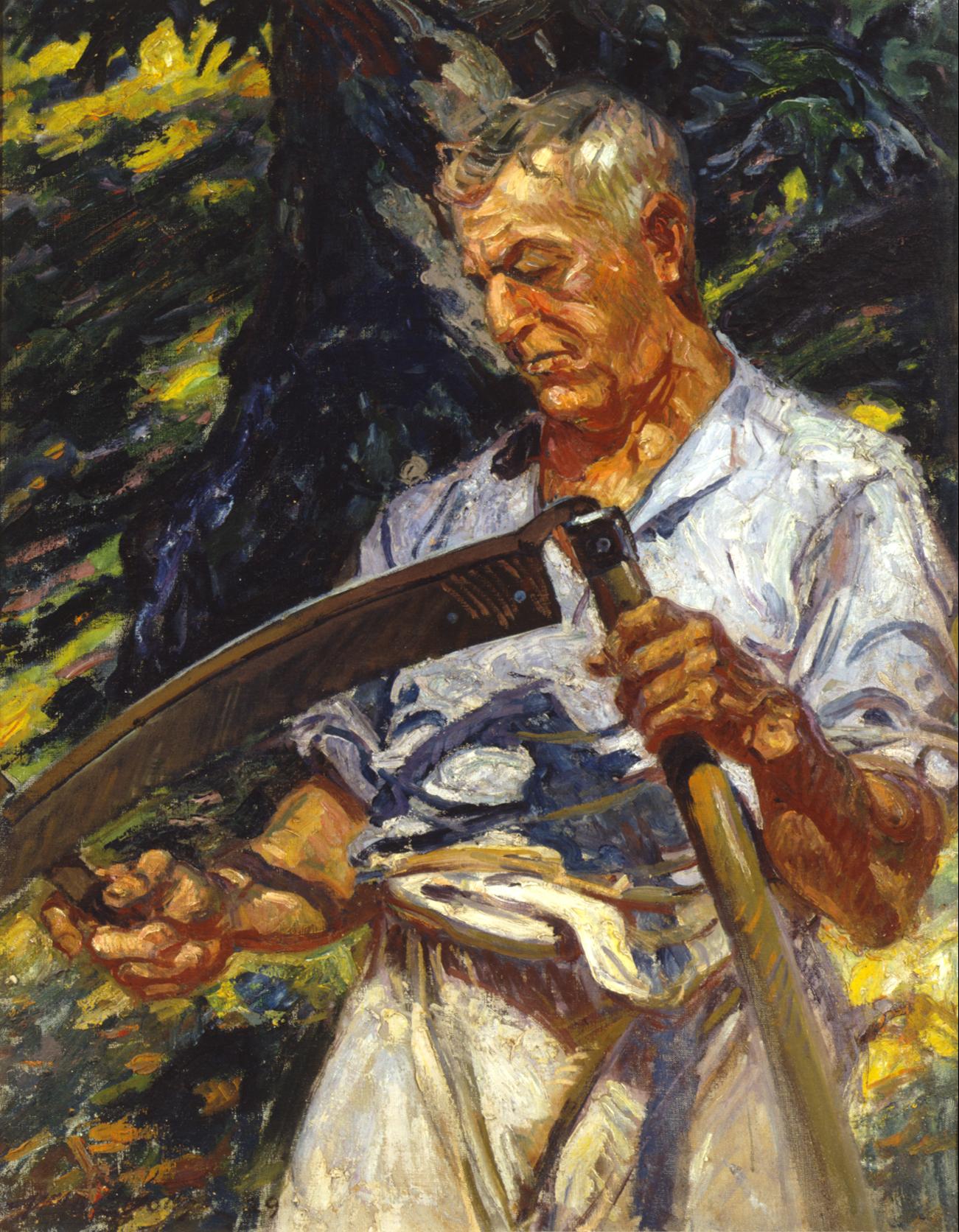 Here we see a man sharpening a scythe, about to begin the day’s work. We know it is early morning—the shadows tell us the sun is low in the sky, just coming up.

To express a feeling of strength, power, and vitality, the artist used broad, slashing brushstrokes. The paint here is thick with colors freely mingled, and though the image is strong and clear, there are actually few details. 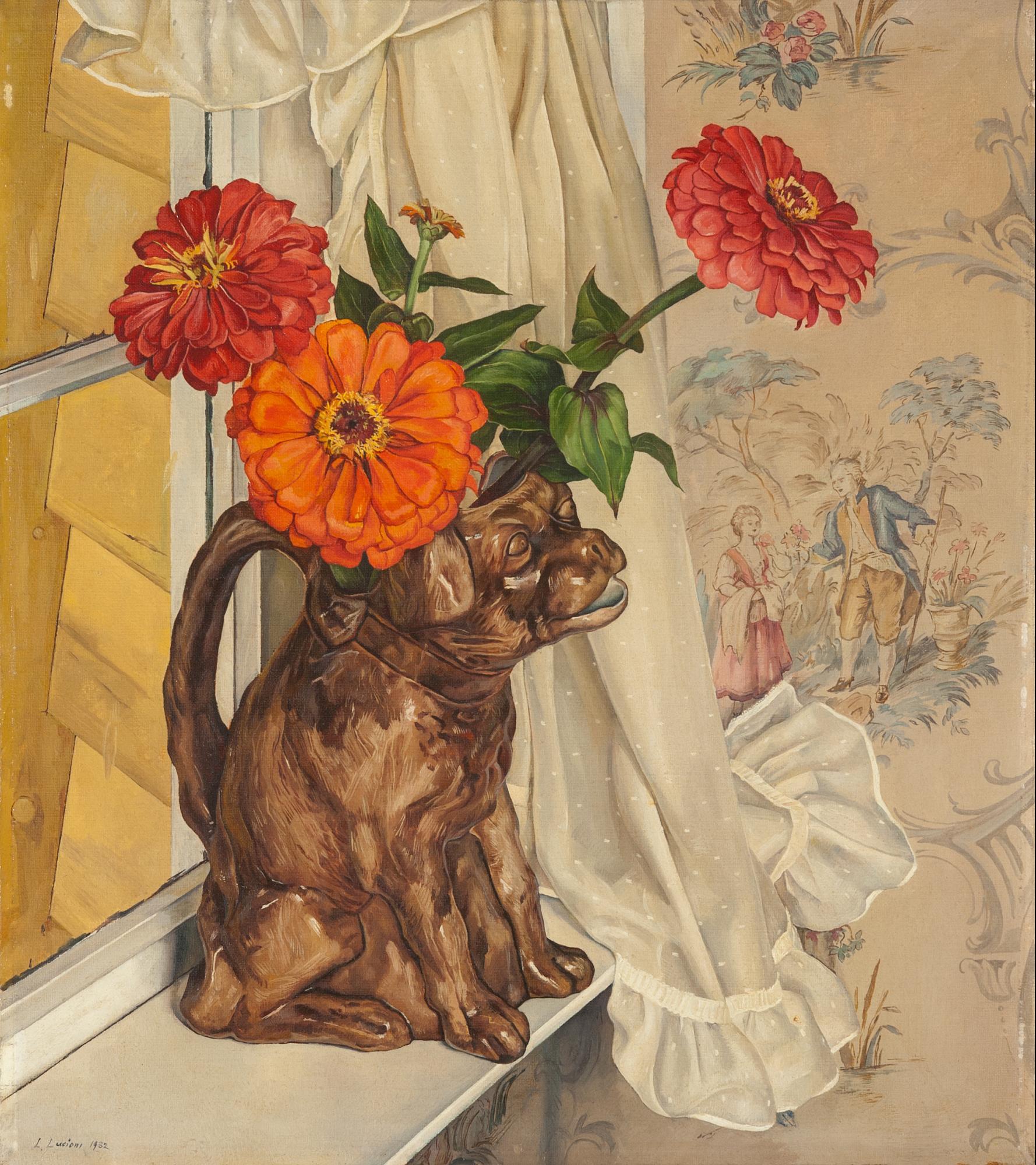 So realistic does Lucioni’s still life appear that what makes it modern is not immediately apparent. It is his color—exaggerated and unusual, in some places wholly manufactured. Lucioni considered himself a realist, but, like a great many painters, enjoyed the freedom of invention. Modern impulses that had seeped into the American art world gave painters greater freedom to experiment, even those, like Lucioni, who advocated careful, linear drawing.

Having built his fortune through the chain of popular S. H. Kress & Co. five-and-dime department stores, Samuel H. Kress (1863—1955) wanted to bring the riches of European old master paintings to everyday Americans in the midst of the Great Depression. The Samuel H. Kress Foundation later built on this idea by donating artworks to more than 40 museums nationwide.

In 1954 and 1962 the Columbia Museum of Art received two large gifts of Renaissance, Baroque, and 18th-century art from the Kress Foundation of New York. Thirty of these paintings, representing the 13th to the 18th centuries, are now on an extraordinarily rare tour, making these art-historical treasures accessible to new audiences.

Organized by the Columbia Museum of Art, South Carolina
With support from the Samuel H. Kress Foundation, New York 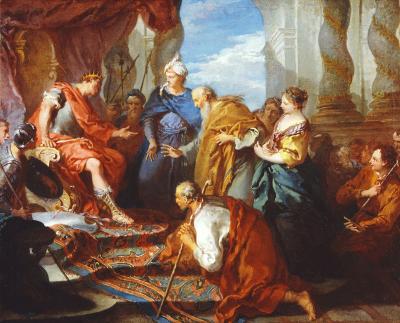 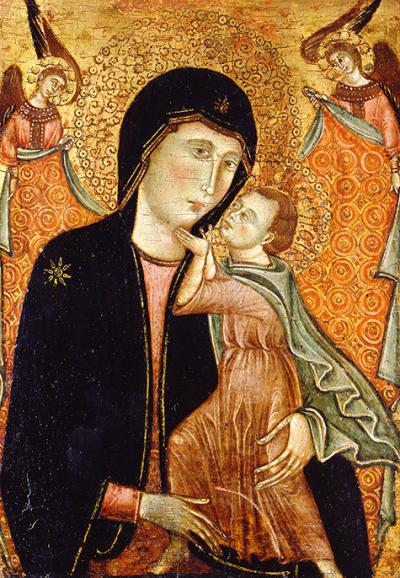 Plan your visit to the CMA today to see our themed collection.