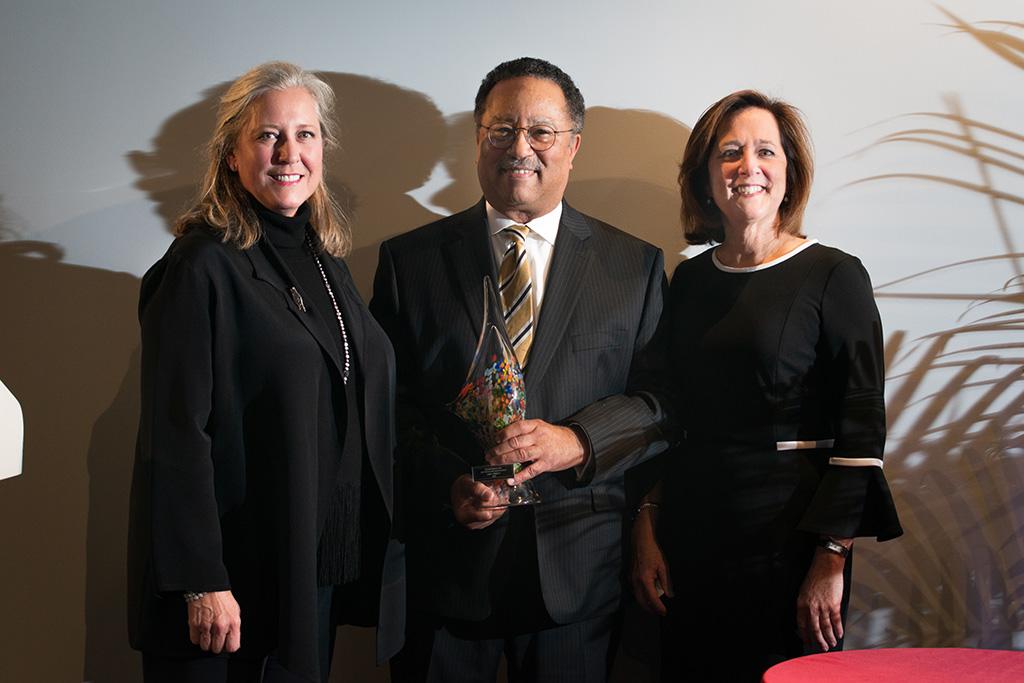 Columbia, S.C. – The Columbia Museum of Art is proud to have presented the 2018 John Richard Craft Leadership Award to Luther J. Battiste III. A community leader, philanthropist, and public servant, Battiste epitomizes the values the CMA recognizes each year with the Craft Award. Executive Director Della Watkins and Board of Trustees President Rachel Hodges presented the award to Battiste at an elegant appreciation dinner celebrating his service on Wednesday, November 14. The Craft Award, named for the CMA’s first director, is the highest honor the museum bestows.

“Luther Battiste is a positive force in the life of our community, a person distinguished for his balanced and productive leadership and love of the arts,” says Watkins. “He has happily contributed to the museum’s growth and continuing success and served with modesty as an example for how to strengthen our shared commitment to culture. It is a privilege to recognize Luther for his outstanding service.”

A graduate of the University of South Carolina and Emory University School of Law, Battiste is a founding shareholder of Johnson, Toal & Battiste, P.A. Battiste entered the political arena in 1983 and made history by becoming one of the first two African Americans elected to Columbia City Council since the Reconstruction Era. He served 15 years as a councilmember, including two terms as Mayor Pro Tempore. His many honors include Distinguished Alumnus Award from the University of South Carolina, inductee of the South Carolina Black Hall Fame, and the Richland County Bar Association’s highest honor, the John W. Williams Award. He has served as a board member of Columbia College and as Chairman of the Board of Governors of the Capital City Club.

Through his board service, committee participation, and considerable gifts to the museum, Battiste has been a dedicated member of the CMA for nearly 30 years, which reflects his commitment to supporting a vibrant and enriching culture for South Carolina. Over the years, Battiste has lent his considerable skills and passion to the museum in numerous capacities, including advocating as a councilmember for the museum’s move to Main Street in 1998 and serving as president of the board of trustees from 2012 to 2014 and on committees including business, executive, and government relations; he currently serves on the finance committee and is a member of the Taylor Society, Legacy Society, and the Friends of African American Art & Culture membership affiliate group. An avid collector and proponent of African American art, Battiste sponsored the landmark 2015 exhibition REMIX: Themes & Variations in African American Art and loaned work from his personal collection for the 2016 exhibition Spoken: Portraits in Black. He also lent his support to the Think Art! capital campaign, which raised funds for the major CMA transformation project, currently in its final stages.

“To look over a list of Luther’s projects and accomplishments is to get a glimpse at what it means to live life to the fullest: He was buying and promoting African American art long before it became a hot commodity; he is a jazz radio DJ; and he has been an avid supporter of local arts institutions, all on top of being a prominent attorney, devoted husband, and involved citizen,” says Will South, CMA chief curator. “Luther Battiste clearly isn’t waiting for the music to start—he is busy making it.”