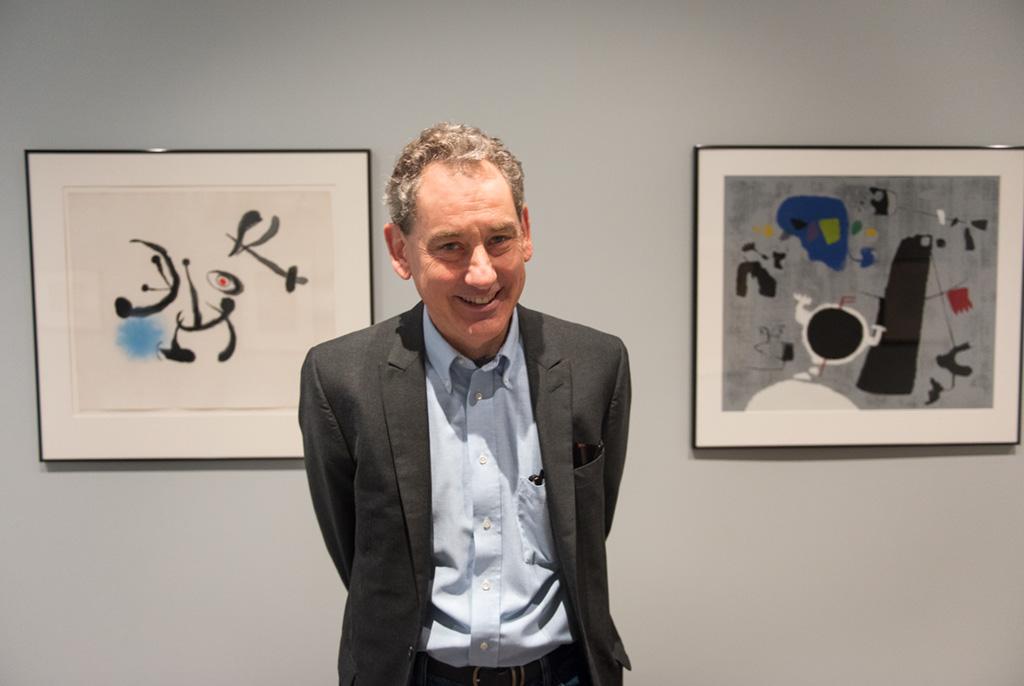 On Willi Baumeister and His Cosmic Gesture

It’s a wonderful surprise to see Willi Baumeister’s Cosmic Gesture in the CMA’s new installation. First spotted at the preview by my lynx-eyed art historian wife, Susan Felleman, my first sideways glance elicited a premature misattribution: Joan Miró. But no, Miró hangs next to his German friend’s silkscreen print, and beside Miró a work by their common Alsatian/Swiss friend Jean/Hans Arp. Having written my Ph.D. dissertation and various articles and book chapters on Baumeister and spent much time in his former house and archive in Stuttgart, when my eyes focused it was like I too had encountered an old friend.

Cosmic Gesture (in German: Kosmische Geste) is a silkscreen print. The CMA’s version is number 4 of a series of 40. Silkscreens are highly reproducible, so an edition of 40 is relatively small, making this an uncommon if not extremely rare work of art. And if you are going to have one Baumeister silkscreen on display, this is the one to hang. Working with the Stuttgart printmaker Luitpold “Poldi” Domberger (1912 – 2005), Baumeister introduced this technique into German fine art. Cosmic Gesture was their very first collaboration. Baumeister was happy to be able to produce affordable works of art in the early German postwar period, when there was not yet a lot of money  in the German economy. Stuttgart was in the American zone of occupation, and he was known to trade works with American soldiers for boxes of his beloved cigars.

Baumeister also appreciated the matte surface that silkscreen ink produces. He hated pictures with shiny surfaces and treated his paintings with buttermilk to diminish light reflection. Notice too the appearance of texture in the greyish-blue ground on which those otherworldly black, blue, yellow, green, red, and violet shapes dance their pas de deux with the calligraphic strokes suspended in space in the nearby Miró. That texturing, as well as those forms, also relates to Baumeister’s painting: Baumeister often mixed sand with his paint to approximate the rough surface of a wall. He wanted his paintings and prints to connect directly to their environments, like the paintings on the walls of prehistoric caves, which he loved to visit.

Baumeister met Miró in 1939. Though the Nazis had declared him a “degenerate artist,” removing his work from public collections, firing him from his teaching position, and ultimately forbidding him to exhibit, Baumeister continued to work on his Modernist, abstract art in private. Having been very active in avant-garde circles in the 1920s, he had many connections across the European art world. In January 1939, in honor of his 50th birthday, the Paris art dealer Jeanne Bucher, who largely showed Surrealist art like Miró’s, offered Baumeister an exhibition. The German artist managed to ship his paintings to Paris and to travel there himself. The press was requested not to report on the exhibition, so we don't know how the exhibition was received. We do know that Miró came to the opening, and two days later Baumeister visited him in his studio. Baumeister wrote in his diary that the Catalan was "a pleasant and humble man," and about the studio visit: "Afternoon at Miró's. Personal stamp of his paintings somewhat cruel. All-in-all though, a strong impression."

Baumeister’s relationship with Arp began earlier. They were probably introduced to each other by mutual friend Kurt Schwitters sometime in the 1920s. Both joined an international association of abstract artists called Cercle et Carré (Circle and Square) in 1930 and also belonged to its successor, Abstraction Création. In 1931 an Antwerp publisher put out a book about Baumeister. All the texts were in French except one, a German poem by Arp titled simply, “Baumeister,” and inspired by his friend’s paintings. In 1948 Arp wrote in a letter to Baumeister, “The poem I wrote for you many years ago appeared in my collected German poems under the title Einem griechischen Baumeister (To A Greek Master Builder).” In 1938, fearing that his paintings would be destroyed in Nazi Germany, Baumeister sent some of them to Basel, Switzerland, where Arp had arranged safe storage for them. After the war they were in regular contact until Baumeister’s untimely death in 1955 from a heart attack suffered while sitting at his easel and painting.

Shortly after the end of the Second World War, the United States began to establish cultural centers in German cities and named each one Amerika Haus. These facilities included libraries, auditoriums, and exhibition spaces. The purpose was to practice soft diplomacy, promoting American culture to re-educate the German people to democratic values and artistic freedom after twelve years of Nazi dictatorship. In 1948 the Stuttgart Amerika Haus hosted an exhibition by the National Serigraph Society, a group of artists that had formed in 1936 to explore and promote the artistic potential of silkscreen printing, a technique which was largely confined at the time to industrial uses. The Stuttgart printmaker Domberger attended the exhibition and began experimenting with pulling silkscreen serigraphs, sometimes using nylon stockings (rather than hard-to-obtain silk) to create the net through which ink would be pressed to create multiple, and almost infinite, images. Each color requires a separate pulling through the stencil to create and define the various forms.

At this time, Domberger moved into an attic space in the abandoned Oppenheimer Villa on a hill overlooking downtown Stuttgart. He wrote:

“in this bombed out ruin…lived some students from the Stuttgart Academy of Art, along with a Berlin graphic artist who had survived a concentration camp, a strange art dealer, a textile designer, and on the bottom floor a dance school had opened up. In the middle of all these characters nesting there, Willi Baumeister had his studio, where he worked, received guests, and posted all kinds of announcements and information on the walls in the stairwell for the residents and their friends.”

What Domberger doesn’t say was that by this time Baumeister had been appointed professor of fine art at the Stuttgart Academy and was emerging as Germany’s leading abstract artist and as a spokesperson for modern art in general. In 1947 he published a book that he had written during the Nazi period called The Unknown in Art, which served as the first defense of modern and especially abstract art in postwar Germany. It was in the Oppenheimer Villa that Baumeister learned about silkscreen printing from Domberger and began to work with him, often translating motives from his paintings into graphic series.

Baumeister was one of Germany’s most significant 20th-century artists. Born in Stuttgart in 1889, he began showing prior to the First World War, in which he fought, primarily on the eastern front. In the 1920s his most significant works were geometric abstractions, and he was considered a member of the International Constructivist movement, seeking to apply uncluttered, rational geometric designs in Modernist painting, architecture, and graphic design. At this time his “Wall Paintings,” which also included sand, were intended for Modernist residences such as those designed for the 1927 Stuttgart Weissenhofsiedlung exhibition of model homes by his friend Le Corbusier, who decorated his villa at that exhibition with Baumeister’s paintings. Such tendencies are most associated in Germany with the Bauhaus art school. Despite his name, Baumeister did not teach there, though his best friend and fellow Stuttgarter Oskar Schlemmer did, and Baumeister visited often. In 1928 Baumeister was appointed professor of graphic and applied design at the Staedel art school in Frankfurt, where Max Beckmann held the post in painting. When the Nazi Party came to power in January 1933, Baumeister was a marked man, as he had already been attacked in their newspaper as a “cultural Bolshevik” in previous years. He was fired in March. Part of his great significance for German 20th-century art is that while he stayed in Nazi Germany, he continued to practice his “degenerate art” in private, becoming what is known as an “inner emigrant”: an artist who migrated into his own intensive work and did not comply with Nazi policies that demanded naturalistic and propagandistic art. By this time, he had moved away from rectilinear geometry, and like Miró and Arp, was working with biomorphic forms: irregular, curvilinear shapes that suggest amoebas or other living matter, like those in Cosmic Gesture.

After leaving Frankfurt in 1933, Baumeister, his wife, and two daughters moved back to Stuttgart into his wife’s familial house at Gerokstraße 39. Next door was the Oppenheimer Villa, a Modernist residence designed in 1926 by the Jewish Stuttgart architect Oskar Bloch for Edgar and Fanny Oppenheimer. The villa survived Allied bombing but was destroyed in 1972. After the Jewish Oppenheimers fled Nazi Germany in 1934, first to Zürich, then to Montreal and on to New York, their house was commandeered as a Stuttgart headquarters for the Nazi’s infamous terror unit, the SS—a situation which made Baumeister’s life, and the continued practice of his “degenerate art”—risky. When Stuttgart began to be heavily bombed in 1942, he moved his family to a small town in the Swabian Alps called Urach and concentrated on creating works of graphic art. He would often rub his charcoal over the surface of the paper to pick up the texture of the rough wooden table on which he worked, or that of the cabin’s clapboards. Many of these became the basis of his extensive print series after the war.

Baumeister and the U.S.A.

In 2013 I published an essay on Baumeister’s American reception in the catalogue of the exhibition Willi Baumeister International, held at Stuttgart’s museum of modern and contemporary art, the Kunstmuseum Stuttgart. These are the opening quotations (epigraphs) and the conclusion of my essay:

It would take some future retrospective exhibition, stretching back to around 1919, to enable a full appreciation of this painter, who played such a significant role in postwar Germany.
Aufbau, New York, February 1956

…the best painter associated with post-war Germany remains the brittle-y sensitive abstractionist-surrealist Willi Baumeister, whose mature work dates from the lean days of the late 40’s and early 50’s, and who was already dead in 1955.
Franz Schulz, The New York Times, 24 January 1965

Conclusion
There has never been a comprehensive Baumeister exhibition in the United States, one that would present his career in all its diversity of styles, media, and formats—to include paintings, reliefs, prints, drawings, graphic designs, collages, and theater designs from 1919 to 1955—and integrating all of these into their historical contexts. In response to the Kleeman Gallery “memorial exhibition” in 1956 the New York German language newspaper Aufbau—founded in 1934 by German-Jewish exiles from Nazi Germany—stated (see epigraph) that it would take a much more comprehensive exhibition to appreciate and evaluate more fully Baumeister’s work and significance. Into the second decade of the twenty-first century, the United States still awaits such an exhibition that would both mark and stimulate a more thorough and accurate reception of this key figure in twentieth-century art.

For more on Willi Baumeister, see the website of his archive, which since 2005 has been housed at the Kunstmuseum Stuttgart:  http://www.willi-baumeister.org/en