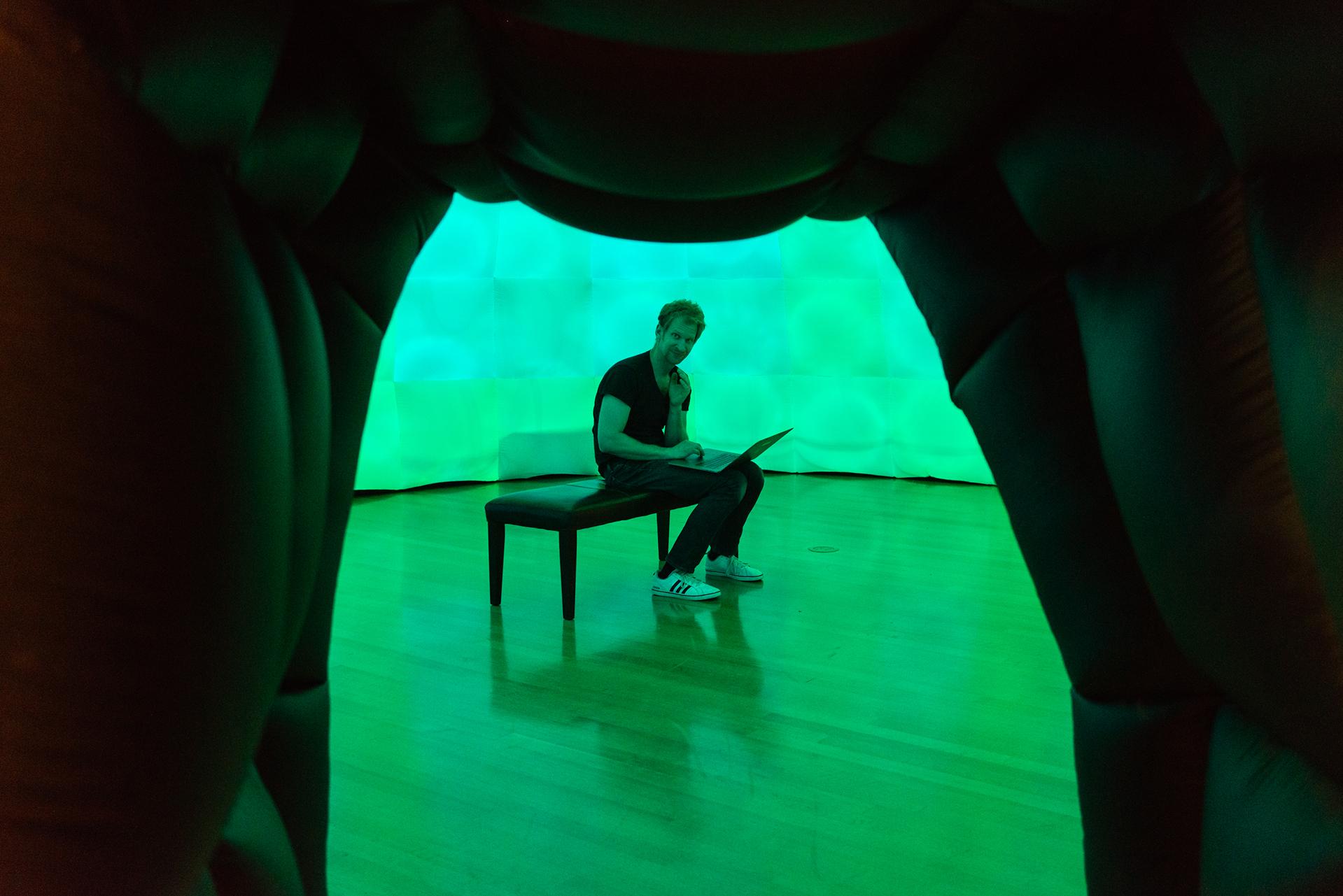 There's a Unicorn Loose in the Museum

While we underwent our recent physical transformation, the Columbia Museum of Art staff worked thoughtfully behind the delicate scrim of dust and heavy construction barriers to make five new experience promises to our museum guests. These include being playful and vibrant, and I’m not sure that a single exhibition could hit those points any better than Wow Pop Bliss: Jimmy Kuehnle’s Inflatable Art.

Jimmy Kuehnle is a Cleveland-based artist who is a bit of a unicorn. On the one hand he is an instructor, community provocateur, and one of the most serious and professional artists I have ever met, and on the other hand he simply wants to inspire contagious fun. His inflatable structures bounce the concept of sculpture over into the interactive realm and, unlike other museums displays, you are encouraged to touch and interact with his sculptures playfully. Mostly, you are encouraged to have a memorable museum experience.

When Kuehnle and I first started talking about this exhibition two and a half years ago, we were discussing a series of inflatables much like what he was making for museums around the country. These come alive with lights and blowers, sometimes inflating and deflating rhythmically. At the Hudson River Museum, his inflatable stuck out of a bell tower and was blasted by wind off the river. At Crystal Bridges Museum of American Art, his abstract inflatable creature floated serenely on the surface of the museum’s Lower Pond. When it came time to finalize the exhibition plan for Columbia back in 2017, I asked Kuehnle not where we were, but where he wanted to be in 2019. The answer was more technology.

In his generous spirit, the artist always wants to have some element of his sculpture available for consumption whether or not you ever enter the museum. In this case, he is using the grid matrix above the entrance on Boyd Plaza to support Winking Windbags. Self-illuminated, this inflatable also acts as a calling card for the exhibition inside, even at night.

Wow Pop Bliss is a mixture of brand new work—constructed to fit the CMA—and existing sculptures that have been structurally reconfigured and geared up with new computer coding. Inside our exhibition galleries are a dome, a labyrinth, and a double row of boxing glove-like bursts. Each has been subjected to a curious mind’s current obsession with tiny computers and a Willy Wonka-esque desire to create strange environments and then invite you into them. Not only are you able to reach out and touch these soft fabric surfaces, but the dome even reacts to your presence and changes around you.

Inflatables belong to a long and illustrious, if little-known, branch of art history and architecture. Within Kuehnle’s own artwork, inflatables have a particular origin story. He is a performance artist who created a series of hand-built bicycles during his graduate school years. These bicycle performances each had themes, like Drawing Bike, Invisible Bike, and Rubber Bike. Kuehnle sewed costumes for himself that matched each theme and then rode these fantastical bicycles around cities, soaking up the public reaction. Kuehnle loves the ridiculous joy of performances such as these and the way people start to follow along after him. Meanwhile, in terms of his maker’s process, it was the rather unassuming part of sewing the costumes that started to gain his interest.

Kuehnle went from sewing costumes to sewing inflatable performance suits, and then turned his industrial sewing machine to large-scale, stand-alone sculptures that could be there long after he went home. The through line in all this is absurd enjoyment. This artist doesn’t make sculpture to sit on a pedestal and be admired—he wants to wear it and shake your hand and make you feel like he just bought you an ice cream cone. The goal is to tap into art’s ability to impact people in a personal and relatable way, rather than being standoffish and effete.

This installation is not a children’s birthday party bouncy house, though. His works are incredibly laborious pieces of sculpture that simply delight. If you’ve ever heard me speak on a gallery tour about my so-called “boyfriend” Ellsworth Kelly, you know that I love how the artist takes the spare, flat, geometric shapes of modernism and injects them with Puck-like spirit. I often say that Kelly’s colorful, irregular, two-dimensional printed shapes seem to fill like lungs, take a living breath, and hover on the page. One might argue that Kuehnle takes this aspect of Kelly’s work a two-step further and lets color and shape live in three airy dimensions.