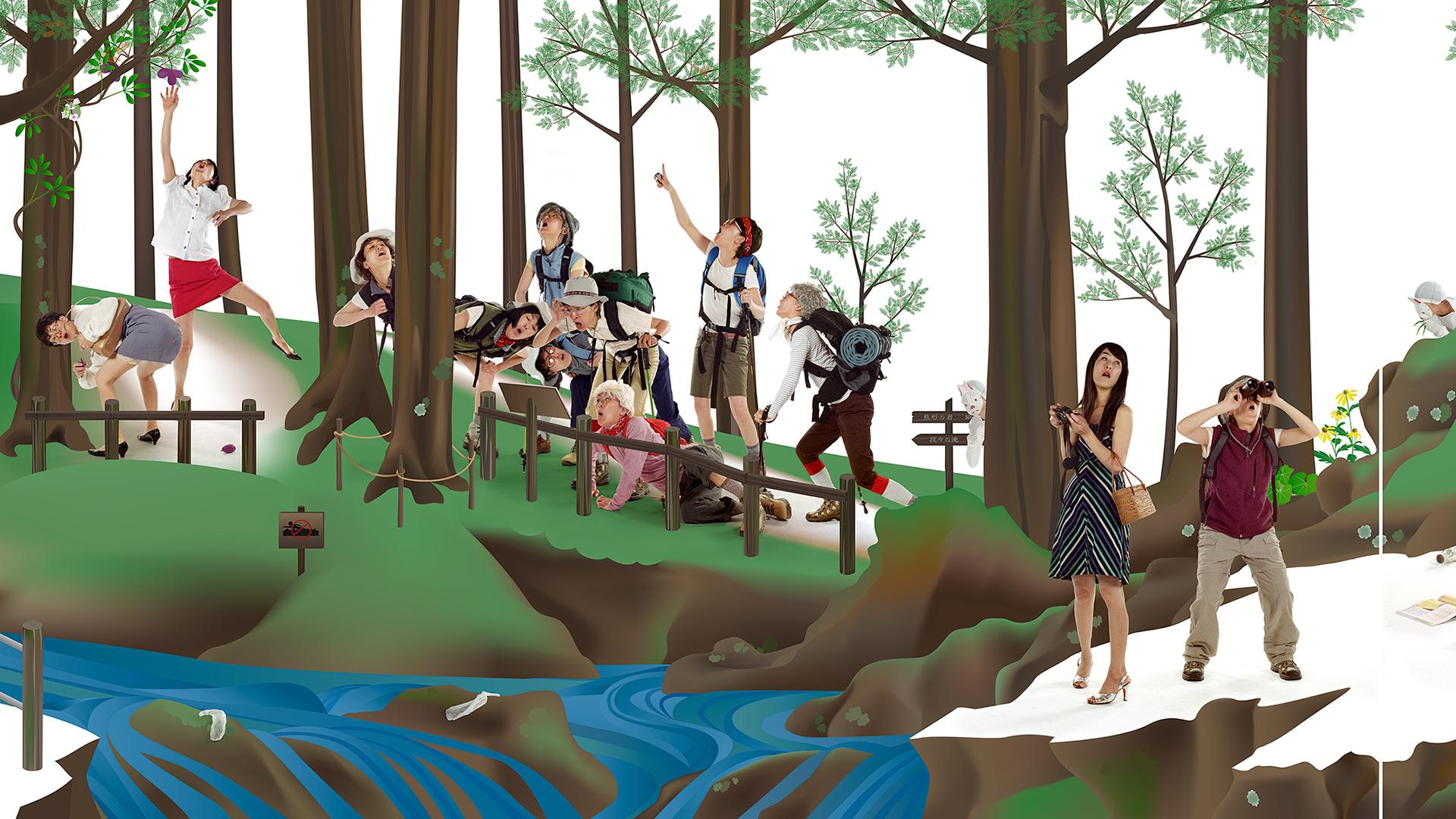 Exploring the Worlds of Mimi Kato

Mimi Kato: Ordinary Sagas is storytelling that brightly interweaves the fantastical and the everyday in imagined landscapes. The action ranges from falling off a bike in the city to epic battles in the woods. Ultra-contemporary and also based on historical Japanese painting, this exhibition is food for the senses and for the brain. I am excited about the different kinds of conversations Kato’s work sparks about culture, humor, landscape, memory, feminism, theater, human activity, and control.

At first glance, Kato’s work confronts the viewer with an overload of visual information. This is due to the sheer number of dynamic characters scattered across her colorful landscapes. She generally draws these cityscapes and landscapes on the computer from her memories of Japan. When looking at Kato’s extraordinary images, your eye wants to skip across the many gestural figures like river stones — slow down and head for the backgrounds first, where her deep and enduring interest in nature sits.

Born and raised in Nara, Japan, Kato has lived in the United States since 1998. Having resided in Colorado, Texas, Alabama, New Mexico, and now, Cleveland, Ohio, she has experienced a range of big, impressive, variously dry and arid, snowy, and leafy landscapes. What feels like home, however, is the compactness of Japan and the landscape painting traditions it inspired. Here in the U.S., when Kato does recognize a nostalgically familiar Japanese plant such as kudzu, it is deemed invasive. It must feel like living in a strange world where everything that makes sense is flipped.

And yet she comes from a storied place. Nara, where Kato’s parents still live, was the emperor’s home and Japan’s capital from 710 – 784 CE. It is peppered by World Heritage Sites that include Buddhist temples, a Shinto shrine, and a dense primeval forest. This is a landscape officially trapped in amber, but Nara has also been urbanized as a tourist city. The past and the contemporary present sit almost on top of each other, just as in Kato’s artwork.

Embedded in her landscapes, Kato confronts the viewer with distinctly human activity. Every costumed figure is a self-portrait of the artist herself. Her poses are grandly dramatic — often contorted and grimacing or stretching and bending — evincing each emotion to its physical fullness, even if just a yawn.

Kato finds these works humorously funny. In talking to her early on, I had to find the missing link between her notion of comedy and my own. Hers comes, not from the American slapstick of Saturday Night Live that dates to the 1970s, but from the Japanese theater called Kyōgen that dates to the middle of the 14th century. Kyōgen arose as a comedic interlude, a break spent laughing between somber Noh mask plays (also an inspiration for Kato). In Kyōgen, exaggerated movement is as important to storytelling as words themselves. We might compare the vocabulary of movements to the stock overacting of early silent film, but even that fails because it is centered mainly on close-ups of the face rather than the body.

Space is important in Kato’s images as well, particularly a Japanese sense of space rather than a Renaissance window on the world with a central vanishing point. Japanese landscape traditionally favors a high vantage point and uses shallow overlapping forms to imply distance. It is an enjoyably complicated sense of space that, after Japan opened its borders to the Western world in 1853, inspired modern European artists to flatten out their paintings and then go steaming toward Cubism. In turn, Japanese artists adapted to outside influences and blended them joyfully with their own traditions. Kato’s images fall into this last category.

She has worked in video, land art, and other media, but Ordinary Sagas showcases the artist’s process combining photography and computer-drawn landscapes into archival digital prints. In addition to some of Kato’s works from 2010 and 2012, including a 34-foot-wide series of nine hanging scrolls, Ordinary Sagas premieres Kato’s newest body of work, a large series titled Wild Corporation, and it is going to spark conversation.

Exhibitions take months and years to plan, and from the time Kato and I started talking in the winter of 2017 until now, the #MeToo movement catapulted the United States into a new place, and the effects are rippling across the world. Kato’s latest series Wild Corporation is something other than #MeToo, though. It is based on Japan’s corporate structure that developed in post-WWII Japan. Women went into one of two work tracks: Sōgō  Shoku, a managerial career track dominated by men with few positions open to women, and Ippan Shoku, a non-career track in which so-called “office ladies” or “OLs” — female employees hired as “pink collar” labor — made tea for male employees and carried out secretarial duties. Office ladies are easily identified by their uniforms, vests and skirts, chosen by the male heads of their corporations. Office Ladies were expected to leave their jobs once they aged past their 20s, married, or became pregnant. Things are starting to change, particularly as the Japanese work force shrinks, but the historical trope still exists and Kato mines it for stock characters, pitted against each other for too few opportunities.

In Wild Corporation, Kato expresses the frenzy of being so powerful, and yet so systemically trapped, that these women (all Kato herself) band together into uniformed tribes and go to war with each other. As part of the Japanese diaspora, Kato is chewing on her recent experiences as a working woman and artist (sometimes beset by other women) and processing them through a familiar lens, namely, experiences she had in Japan when she was in her early 20s. To add to the complexity, she embeds these Japanese corporate workers in an American landscape. The landscapes in Wild Corporation recall the many extensive parks around the artist’s home in Cleveland, and the Japanese sense of space now fully falls away.

Needless to say, we are going to have a lot to talk about this summer because of this artist, including Kato’s richly layered artistic process, her shifting sense of place and identity, and her metaphors on women and work.